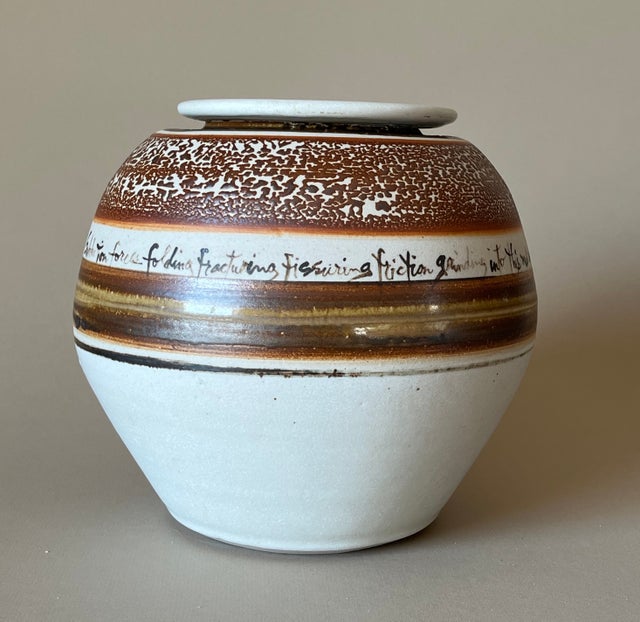 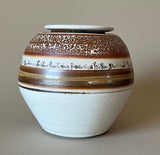 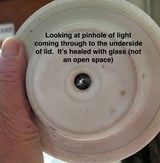 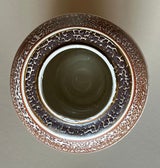 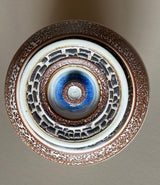 At the widest area is Mid-Atlantic Ridge rock slurry applied thinly, brownish glaze. The same material is applied thickly on the lid where it remagmatizes as it dries and then is changed back into a solid state, rock-like again. It self organizes into sections that look like the small stones I picked up in Iceland where the Mid-Atlantic Ridge is above ground.

The shoulder area is sediment from what I was told is called an accretionary prism near Costa Rica (I was also told that there is no such thing. Scientists and research techs dont always agree.) That sediment in its raw state was very fine particles, almost sticky, and they shrank and clustered into a curdled landscape. This material is also what's closest to the knob on the lid.

TEXT SAYS: “Subduction forces folding fracturing fissuring friction grinding into this mud melted. Tectonic forces pushing and pulling. Mid-Atlantic Ridge rock remagmatizing. HERE now.”  (The word “remagmatizing" was given to me by a WHOI geologist and science writer, Lonnie Lipsett, when I consulted him about words I was making up.)

Sold Out
Add to Cart